To unlock Talent you need “The Code” 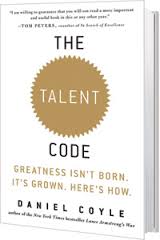 Dick and Sandy Pirwitz are two of our dearest friends. Some think that Dick and I look like ‘ brothers from a different mother’. In fact, a few years ago a beautiful little four year old looked up at Dick and said, ‘Bubba Don, pick me up’  and her mother said, “Stella, that isn’t your Bubba Don.

Sandy, while a bit vertically challenged,  is taller than Shaq in intellect and zest for life. She makes the energizer bunny look old and slow.

Sandy and I share a love for books. She has bookcases filled and is looking for more bookcases.

Over our quarterly coffee , she introduced me to Daniel Coyle’s book, ‘The Talent Code’.

From the title of the introduction to the last page (236 ) this book explains a lot about great talent. Coyle provides compelling evidence that “Greatness isn’t born, it’s grown”

The intriguing title in the introduction is, “The girl who did a month’s worth of practice in six minutes”.

“Every journey begins with questions, and here are three:

Daniel’s search into what he calls “Talent hotbeds” helped him to understand the nature, the ‘Code’, if you will, of how exceptional talent is grown.

This book is divided into three parts:

The major factor in talent growth is understanding a neural insulator called myelin. As we use neural pathway repeatedly the myelin wraps itself around the pathway “the same way rubber insulation wraps a copper wire, making the signal stronger and faster by preventing the electrical impulses from leaking out”.

Talent is formed says Coyle by “Deep Practice”. I’m reminded of the saying, “Practice makes perfect” which is incorrect.

But what motivates people to engage in ‘Deep Practice’ is revealed in the second part of the book-‘ignition’.  How people ‘catch on fire’ and are willing to spend the time and pain growing to greatness is extraordinarily interesting.

And finally, what are the people who teach others to grow their skills like?

The third part of this rich book – ‘Master Coaching’- was really eye opening and significant to me.  I’ve met a few ‘Master Coaches’ over the years and this part of the book demystified many of their practices.

As I continue to read I’m struck at how similar themes appear in writings by others.

In Marcus Buckingham’s ‘First Break all the Rules’ on page 84 he echoes the Myelin reality.  “Talents are the four-lane highways in your mind, those that carve your recurring patterns of thought, feeling or behavior”

And Malcolm Gladwell referred to the 10,000 hour rule in “The Outliers” which is echoed in this book on page 51. “Every expert in every field is the result of about 10,000 hours of committed practice call ‘deliberate practice’ and which Coyle calls ‘Deep Practice’.

All of this leads to defining our talents which is the focus of our next book review in two weeks.